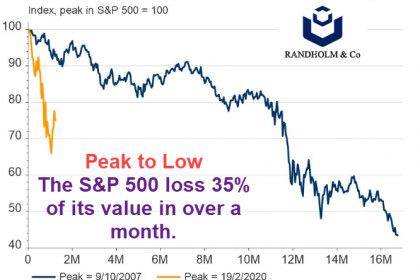 We have now evidences on how market participants behave during the fastest and deepest drop in US Equities in history.

I have been reading every source that I trust and trying to make a logical rationale to give more probabilities to one of the two scenarios: UP or DOWN from here. However it is still early and VIX is still high. At this point, I would be more impress if SP500 is able to reach 3000 before double testing the 2200 yearly low. Today the SPX close March at 2626. Of course, advancements from Europe (Italy & Spain) and Asia (China, Japan, etc) can have a great impact.

Oil back to historical low levels – Should turn to be a nice long term buy.

Gold, everyone say UP but so far is not moving higher

The first picture below compare the current drop vs the financial crisis. At this point, most of the people that I have talked, do not expect this drop to reach more than 12 months. One the other hand, I have clear and pre-set method to manage the capital and trade. I will follow the system’s plan.

From Fathom they said:

“The fall in the S&P 500 from its peak on 19 February has been dramatic, with the equity benchmark losing close to 35% of its value in just over a month. During the Global Financial Crisis it took a year to fall that far. Of course, the COVID-19 outbreak is a very different, and more immediate kind of economic shock that has resulted in the forced shutdown of a large number of industries. Last week, the French statistical agency, INSEE, estimated that activity in that country was running some 35% below normal levels. There is no doubt that the global economy is suffering a severe contraction, on a scale not seen in modern times. The only question is, how long will it last? Since finalising our Global Economic and Markets Outlook for 2020 Q1 just two weeks ago, we have raised the weight we attach to a V-shaped recovery, where global output recovers within four quarters almost to the level it would have been had the virus never emerged. But we have also increased the weight we attach to an L-shaped recovery, the most pessimistic of our three scenarios, where COVID-19 continues to depress economic activity until a vaccine is found, triggering a financial crisis. To us, the range of possible outcomes is almost bimodal. Equities rallied last week, as it became clear that the US stimulus package would pass. But volatility remains high, and it is unlikely that we have seen the bottom yet.”

And presented this picture:

Thursday’s release of US initial jobless claims showed an unprecedented spike to 3.3 million in a single week. That sort of number is multiples of the peak during the Global Financial Crisis.

During the previous crisis, continuing jobless claims peaked at over 6 million. It seems likely that the US will exceed this figure in April.

Lawmakers in DC have designed a $2.2 trillion fiscal stimulus package that will increase unemployment insurance and offer loans to companies (among others). That scale of increase in borrowing is more akin to wartime measures than traditional countercyclical stimulus.

If you have questions for me, just ask.