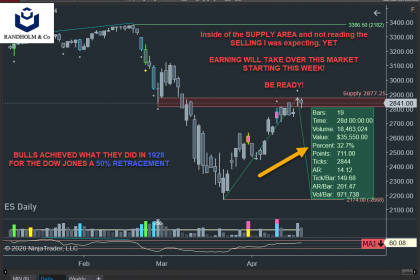 A) UPDATE ON SP500 and POSITIONING

EARNING WILL TAKE OVER THIS MARKET STARTING THIS WEEK!

Read Post from April 7th where we mark this area as important.

As of today, I see that bulls were able to do what it was expected. They took it above the 50% Fib retracement as they did 1928 (View 3d party Twitter).

There is a strategic view here:

I found this logic is very straightforward.

Currently, my position is clear, I will profit if the market trades higher but I will not lose if we drop from here. Of course, this can change fast.

The market as of now is broken:

“The storage is too full for speculators to buy this contract, and the refiners are running at low levels because we haven’t lifted stay-at-home orders in most states,” said Phil Flynn, an analyst at Price Futures Group in Chicago. “There’s not a lot of hope that things are going to change in 24 hours.”

You can watch a Reuters video or read their article

NEW YORK (Reuters) – U.S. crude oil futures turned negative on Monday for the first time in history, ending the day at a stunning minus $37.63 a barrel as traders sold heavily because of rapidly filling storage space at the key Cushing, Oklahoma, delivery point.

Brent crude, the international benchmark, also slumped, but that contract was nowhere near as weak because more storage is available worldwide.